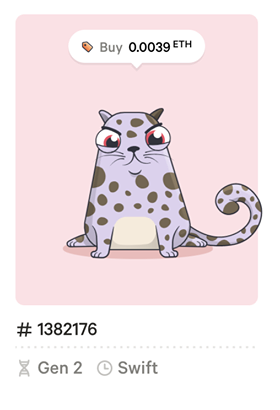 This project inspired by this lovely kitty I breeded, which I admit looks like a criminal…

I’ve been spending a lot of time in the dark, neckbeard basements of blockchain. Recently, I stumbled upon CryptoKitties, which their homepage advertises as:

CryptoKitties is a game centered around breedable, collectible, and oh-so-adorable creatures we call CryptoKitties! Each cat is one-of-a-kind and 100% owned by you; it cannot be replicated, taken away, or destroyed.

There’s a lot to unpack here and let’s get straight to it:

I’ve also been spending a lot of time reading about human rights, ethics, and social good. The physiognomy article we read for class really piqued my interest because as junk science as it can be people are actually using it. Perhaps even more troublesome is that beyond the obviously visceral reactions to phrenology, opaque algorithms do encode subtle biases. For example, there are articles floating about claiming self-driving cars do a poor job at detecting dark-skinned pedestrians.

But alas, it seems people avoid these heavy topics.

The physiognomy reading for class is interesting because despite being so wrong, people can still find ways to draw such meaningful conclusions. Many problems abound in the study. Of note:

At the same time, our guts tell us that there are interesting questions in the realm of Physiognomy. That is, we believe that they do have some measure of prediction – e.g. a beautiful (proportional?) person is generally perceived to have an easier life, making the opposite scenario plausible.

Anyway, I wanted to explore intersecting these interests, that is junkish/inaccurate data science, bringing light to algorithmic bias by attacking the heart of the internet… cats, and exploring the world of digital collectibles.

The project is implemented here! https://github.com/epylinkn/operation-criminal-kitty